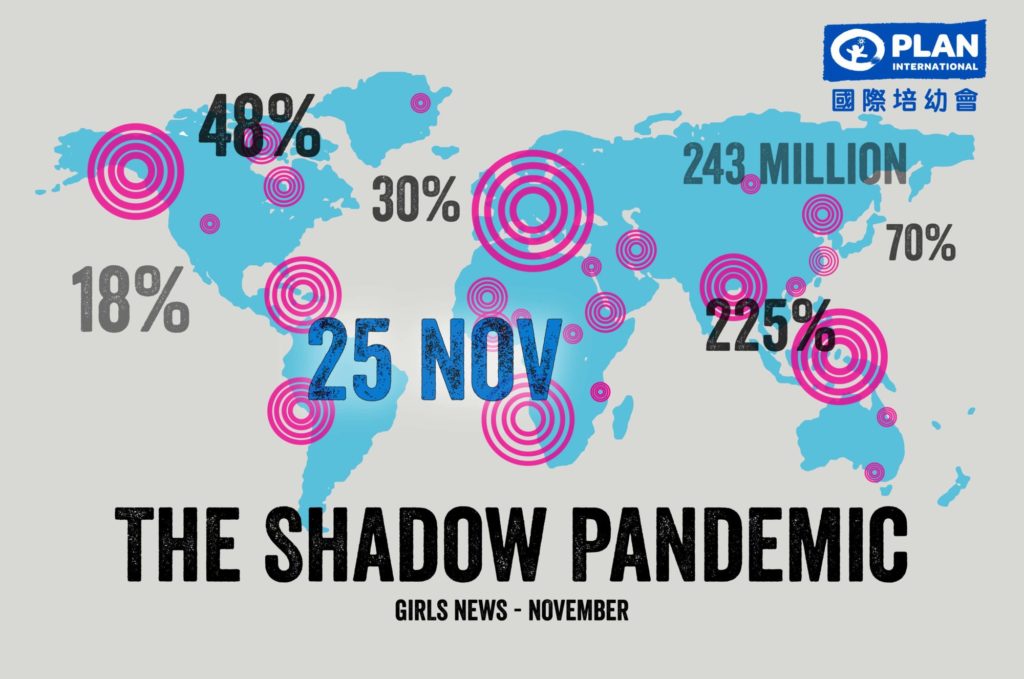 We Fight Pandemic with Masks.
What Can We Do to Fight Gender-based Violence?

We have heard a lot about the pandemic this year and probably spent quite some time looking at the world map, realising there are new cases and lockdown everywhere. The truth is, the coronavirus is not the only thing leaving marks and traces on the map.

As the virus is invading our lives, the United Nations suggested a new term — the ‘Shadow Pandemic’. Pretty much reflected by the word ‘shadow’, this issue comes along with the virus. We are talking about the violent incidents against girls and women.

The figures in the picture are not number of confirmed cases or death tolls but the horrifying numbers symbolising gender-based violence.

In the past 12 months, 243 million female in the world has experienced physical or sexual violence by an intimate partner, accounting for 18% of the 15 to 49 years old female population. 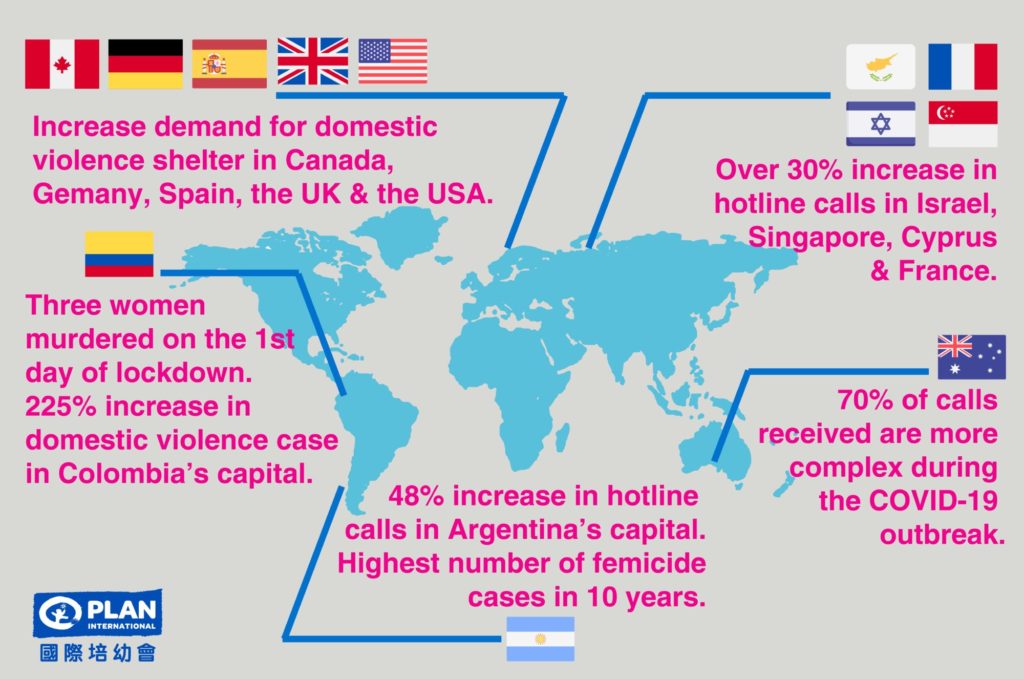 Sexual Violence in Our Society

Numbers only give us a vague idea. What has actually happened to the girls and women?

Women have long been more vulnerable when it comes to gender-based violence, which includes sexual harassment, sexual violence, physical and verbal violence, mental abuses, and domestic violence. You may assume the pandemic has emptied the streets and indirectly reduced the number of crimes; however, the reality is always crueller than what you can imagine.

At the end of July this year, Pamela, a 23-year-old Nigerian girl, came across a roadblock set for antiviral measures inspection when she was riding a bus. The law enforcement officers got onto the bus to conduct individual check-ups. Pamela wasn’t wearing a face mask on that day. According to the law, she should have been fined or jailed. Instead, the officers abducted her to an abandoned house and threatened her, saying ‘if you do not co-operate and have sex with us, we will kill you!’ She had no choice but to follow their orders.

Likewise, research in the United Kingdom discovered that after implementation of the first lockdown policy, one in every five female had encountered some sort of street harassments, including catcalling, stalking and unwilling sexual or physical contact. Another research suggests a shocking proportion of 51% of all girls were sexually harassed after June 2020.

With no doubt, virus prevention is vital. Yet, we cannot lock ourselves indoors completely. Even with the lockdown, everyone, including female, still needs to do grocery shopping or handle different matters outside the house. Our society has failed to provide female with a safe and reliable environment in terms of both virus and gender-based violence prevention.

Home Equals to Safety? The Devil is Right There!

‘Can’t you just stay at home?’

Let alone this saying shows  ‘victim-blaming’ nature, there can be so much more discussions simply considering the safety of ‘staying home’.

Statistics show us a scary fact — the perpetrator is very likely to be among the ones we trust!

Three weeks into India’s first lockdown, Tara called local domestic violence hotline. Tara’s husband had been abusive throughout the 15-year marriage and she usually just swallowed her pain and continue her life. Because of the lockdown, Tara could not avoid her husband in the name of work like she did in the past and they had to spend most of the days under the same roof together. It had brought in more arguments and her husband hit or insult her more frequently than ever. ‘I am under constant threats and I don’t know what triggers his temper,’ Tara whispered in her call because she was afraid that her husband or mother-in-law would discover it.

Tara’s incident is common. Research shows 30% of all violent incidents are caused by victims’ intimate partner and one-third of murdered female were killed by their current or former partner.

The calls to domestic violence hotline of the Hong Kong Federation of Women’s Centres has doubled in the first two months of the pandemic, compared to last year’s data. The Federation said the lockdown has become a hurdle for victims to seek help and receive useful information or aid. The court has suspended service that slowed down the application process of legal documents as well. At the same time, the number of victims moving into shelters has dropped by half due to the concerns over their antiviral arrangements. One of the interviewed victims only gets into the shelter a week after the report because she could not contact the social worker who was at that moment working from home. The safety of that victim during the period was concerning.

Global figures point to the same direction. Less than 40% of the victims sought help and less than 10% reported the case to the Police. Among them, a number of victims could not contact an outside person as they were trapped in the same room with the perpetrator, the service department had temporarily closed, they could not reach the trusted person in social occasions, or could not leave the house under lockdown. For children, school suspension had taken away their chances to get help from teachers and social workers at school, and teachers could not notice any potential domestic violence case earlier, which might cause a tragedy.

Fight the ‘Pandemic’ Together

We say ‘let’s fight the pandemic together’ all the time over the months. Now, can we battle the raging shadow pandemic with the same mentality and face up to the sufferings of female in our community?

Governments and international bodies have no excuse not to take any immediate action tackling the issue. They have to refine their hotline and online reporting mechanism, look into ways to safely handle the victims’ calls in a low profile, improve the antiviral measures in the shelters, and provide antiviral essentials and emergency subsidies to help seekers, alongside with enhanced training to the law enforcement or medical staff. At the same time, the government should promote gender equality, respect and appropriate manner in relationships and emotions management during adversity at schools and in our community. We should call for the public to handle family conflicts with gentle, reasonable and non-violent methods, as well as promoting different solutions to give help-seekers the assistance they need as quickly as possible. Furthermore, we need laws which have a better deterrent effect and education to prevent potential perpetrators.

In view of the above, Plan International has been actively promoting the concept of child safeguarding, coaching parents to pay attention to their behaviour and emotions when they are spending time with their children, and advising them not to use violence on children. We are also working to strengthen existing girl and children protection measures in the developing countries, where resources and gender education are inadequate, with distribution of leaflets, broadcasting, introduction of hotlines and provision of psychosocial assistance to cater the drastically-increased gender-based violence induced by the pandemic. 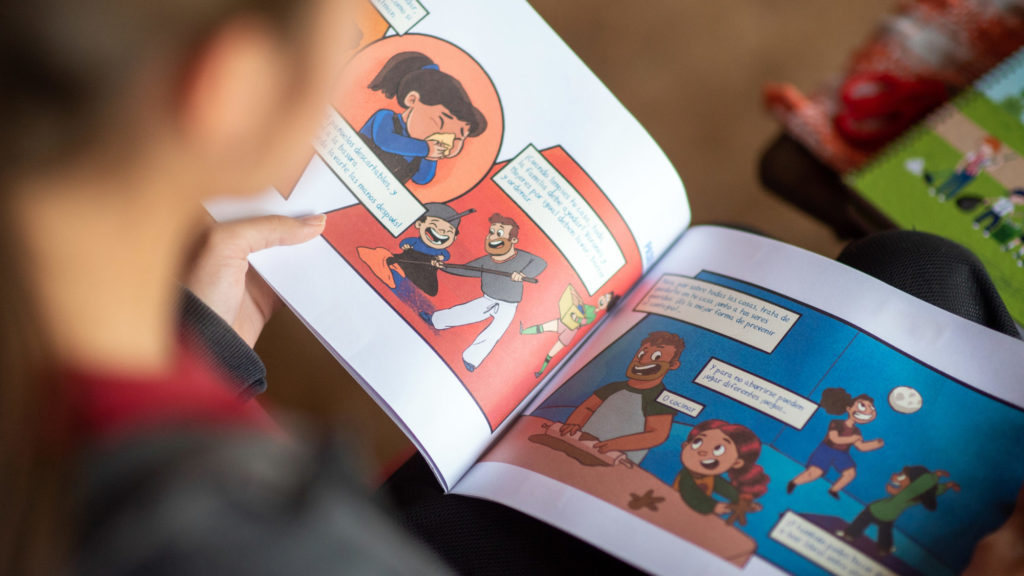 Plan International distributes girl protection storybooks in Paraguay. By using simple graphics and interesting expressions, we teach children to prevent the infection of COVID-19 and how to handle or report when they encounter gender-based violence.

Thousands of female was under gender-based violence during the pandemic in Uganda, Africa. Plan International set up 24-7 hotline to help female facing physical maltreatment, sexual violence and abuses. The 14 experts and help workers in the centre offer help-seekers the safest and most responsive solution. The hotline is running in 19 languages to ensure ethnic minority is not missing out when they need help.

We may go numb with numbers as the pandemic continues. Let us remember that there is a precious life behind every figure. He or she is not just an ice-cold number. We can be more observant in our lives. Victims of gender-based violence often have a hard time to express themselves. If we notice people around us have abnormal injuries, emotions or behaviour, give them care and encouragement to seek help. Let experts lift them from the dangerous situation before anything worse happen. 25 November is the International Day for the Elimination of Violence against Women designated by the United Nations. May we spare some time to express our concerns over gender-based violence and motivate more people or organisations to step forward for women’s rights? Catch the shadow, save lives!