17-year-old Swedish girl Greta Thunberg was elected Person of the Year 2019 by Times Magazine. This new-gen advocate of environmental protection drew overwhelming awareness on imminent need to curb climate change through initiating a global school strike. In the Central Province of Zambia, Central Africa, where 17-year-old Liness calls this unique place her home, is also concerned about the climate crisis. She is an exemplary student deserved of a promising future with achievements that might parallel to Greta’s. Climatic change smashed her dreams, though. Zambia was left with one normal harvest in the past five years due to frequent drought and flood. Liness’ family sustains financial hardships resulting from crop failure. She had to quit school and take up manual jobs to lessen the family’s financial burden. Without formal education, her dreams remain dreams. 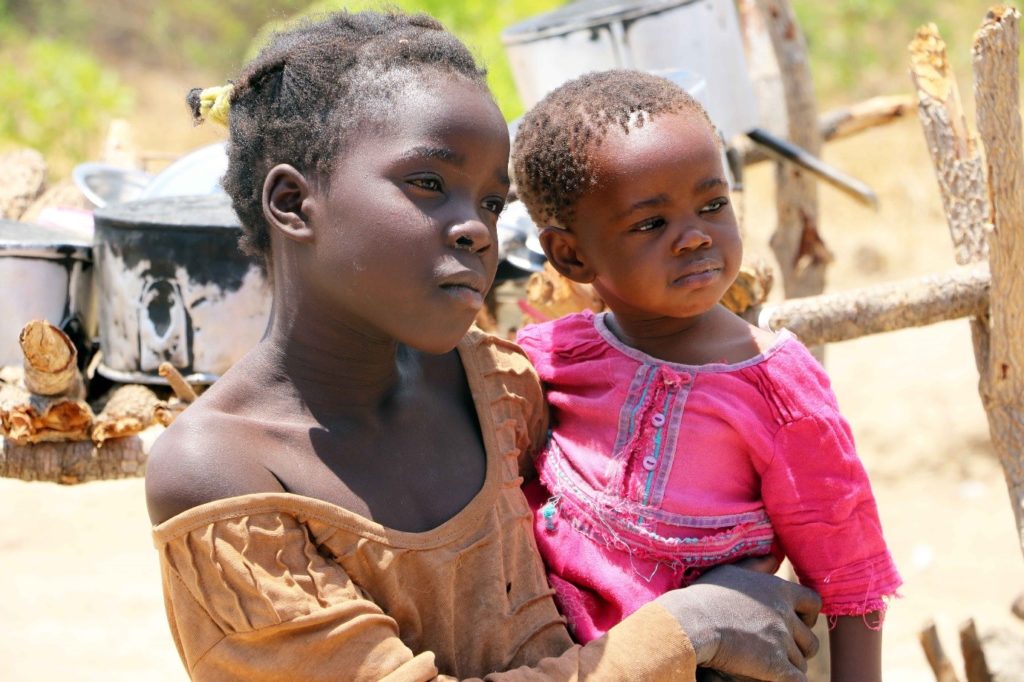 Liness dropped out from school because of drought. She is being robbed of her childhood due to the need to look after her younger sister, take care of household chores and make money for the family.

Climate change is a worldwide issue. We are particularly concerned about the rights of girls in developing countries for they are being grinded between two kinds of “injustice”.

Developing Countries Are the Scapegoats in the midst of “Climate Injustice”

In 2015, the United Nations Climate Change Conference adopted the Paris Agreement. 195 signatories declared curbing global warming by limiting temperature rise under 2℃and enhancing measures in adaptation. While they claim to shoulder responsibilities for a better future, it is the developing countries that bear harmful consequences of achievements by developed countries.

In the past few decades of economic competition, the EU, USA, France, China, Japan and South Korea climb to be major global powers behind facades of success from fossil fuel burning and smog. Meanwhile, developing countries exhibit economic stagnation due to civil wars, scarce natural resources, fragile infrastructures. Developed countries have long been at the top ranks in greenhouse gas emission. They are undeniably responsible for raised average global temperature and environmental pollution. In face of natural disasters, they are swift to mobilize resources and technology to tackle the challenges such as projecting a storm’s path, building dams to keep floods at bay. Developing countries are, however, all helpless and fallen victims with no effective means of disaster prevention and relief. This is how “climate injustice” emerged. 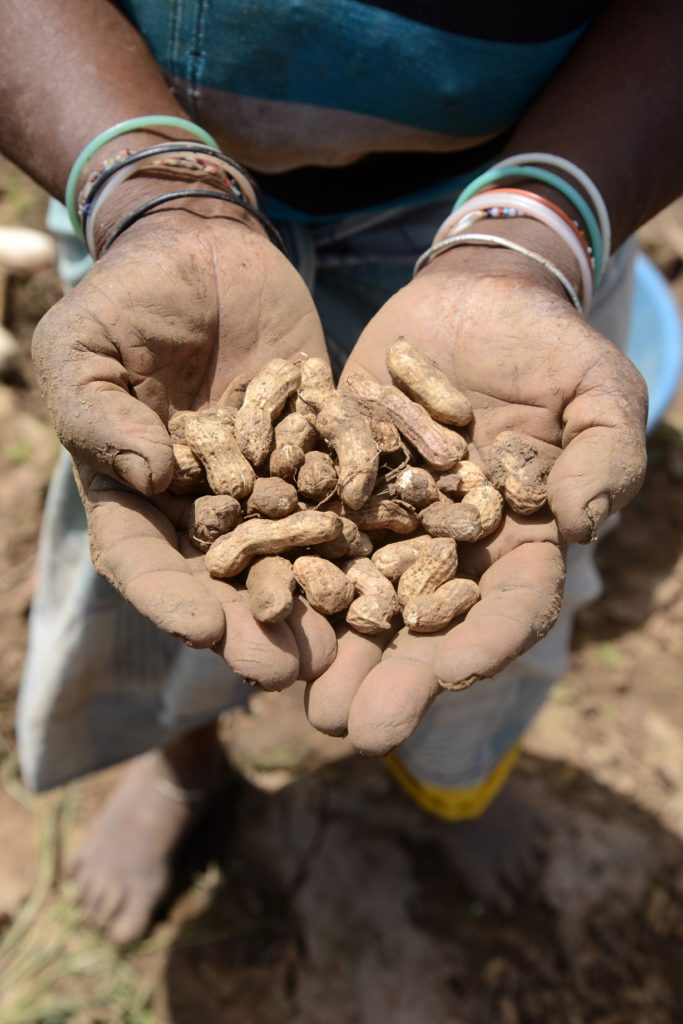 Mozambique in South Africa was devastated by cyclone Idai. Crops died on massive scale followed with starvation in the region. 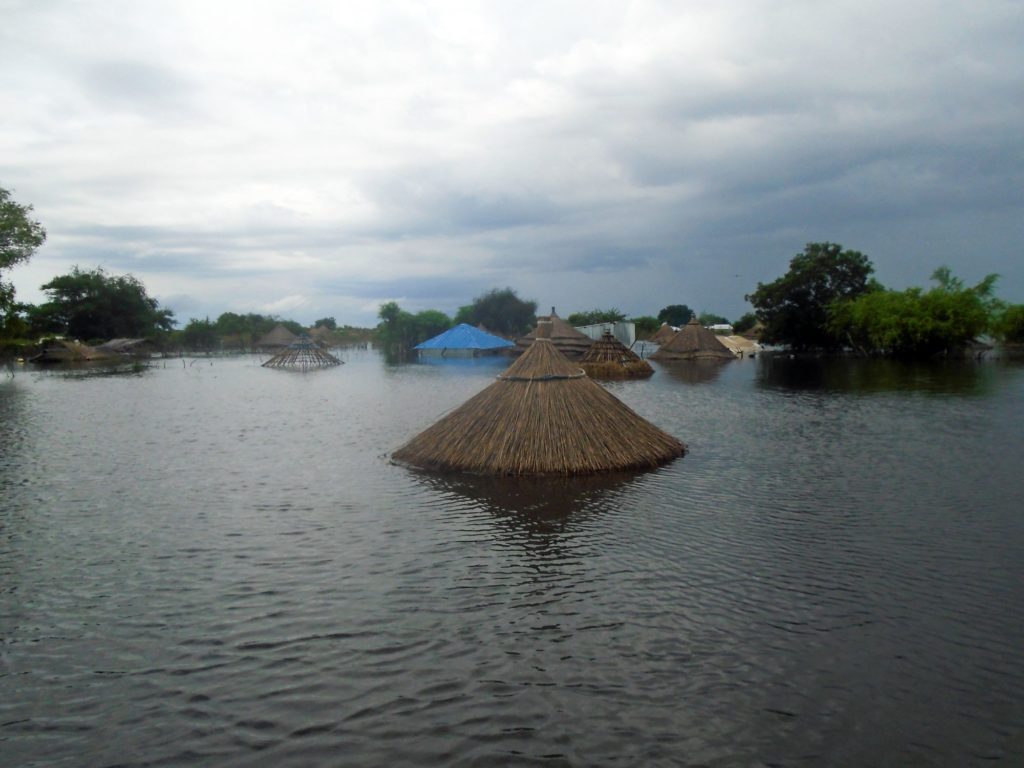 Girls at the Forefront of Battles against Climate Change

At the end of last year, Plan International published a research that signatories of Paris Agreement had ignored exploitation of girls’ rights caused by climate crisis. Girls are deprived of roles in policy-making concerning their future. Females make up half of the world population but their needs are neglected in climate policies. Among 160 signatories, only one enacted policies that touched on “education for girls”; and two on “females”.

The report also highlights how climate problems weigh heavily on girls in developing countries. Long-standing problems like child marriage, child labour, school attrition and early pregnancy have been compounded in cultures cherishing males being superior over females. Liness’s story is epitomical. Natural disasters reduce family incomes. Girls help cut expenses by quitting schools. Inferior social status renders less income-generating opportunities. They can but to perform household chores, engage in child labour for meagre income, or get married off by parents in exchange for pride price while reducing household expenditure. Sadly, married girls endure risks of early pregnancy and death from childbirth as their bodies are yet to be matured. Risks become dire when natural disasters slash on the already poor living conditions as well as medical and hygiene facilities.

Some girls might escape the fate of child marriage to continue with studies, they are often the last family members to eat due to their inferior cultural status. When encountering harvest failure, they have to stay in hunger for days. What is also worth our attention is sexual violence and life-long distraught endured by girls in refugee camps. Some never make it back after venturing out for water and food in extreme weather. This constitutes “gender injustice”. 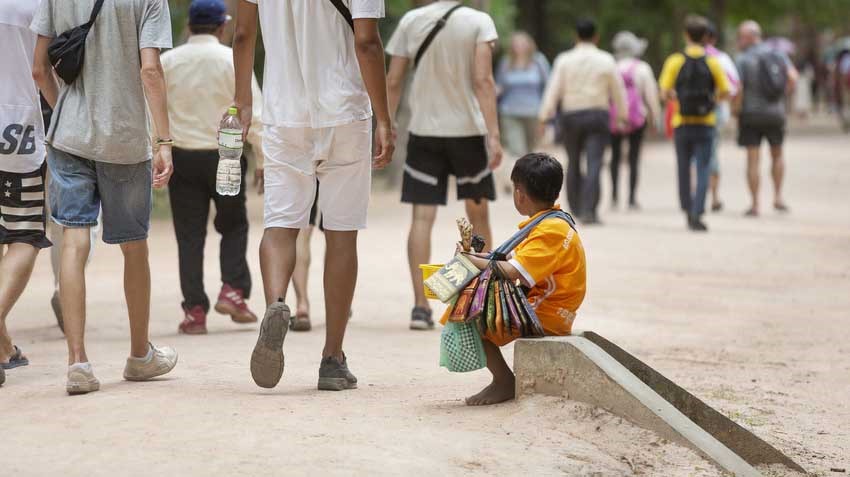 In Cambodia, huge harvest failure forces children out of school to carry out farm work or to sell goods on streets to help with families’ finances. 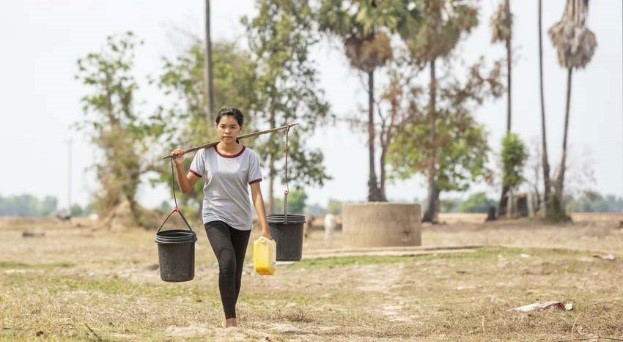 Cambodia is one of the countries that take males as superior over females. Girls have to fetch water for their families from faraway amidst natural disasters.

Climate Crisis is Around the Corner…Walk with Our Girls

As climate issues are dampening, so are girls’ sufferings. Plan International has been working in many developing countries to protect children’s welfare, especially girls, to cope with challenges. Initiatives included providing high-protein, nutritious food to schools in Zambia, livelihood support and vocational training for farmers. As family livelihood improves, girls may focus on studies and avoid child marriage. We also empower girls to voice out their needs at levels of family, community and national. They are encouraged to promote climate adaptive measures in their communities to minimise damages climate change might bring upon. Our work in the developed countries must continue. Through cross-nation collaborations, we can slow down the pace of climate change to better prepare girls in tackling the crisis.

We might not feel the immediate impacts of climate change, we can help eliminate “double injustice” experienced by girls in developing countries. Not only can we protect the environment by limiting waste output and living green lifestyles, but also promote environmental protection among friends and put forth views about environmental policies. We can also help empower girls under the climate crisis to let their voices be heard. Let us spare no efforts to protect the rights of our bright girls in affected regions and build a healthy planet.

You can help underprivileged girls cope with climate crisis, improve quality of lives, receive education and stop gender inequality by supporting Plan International’s Girls Fund via one-off or monthly donation. With your help, they can take control of their future. 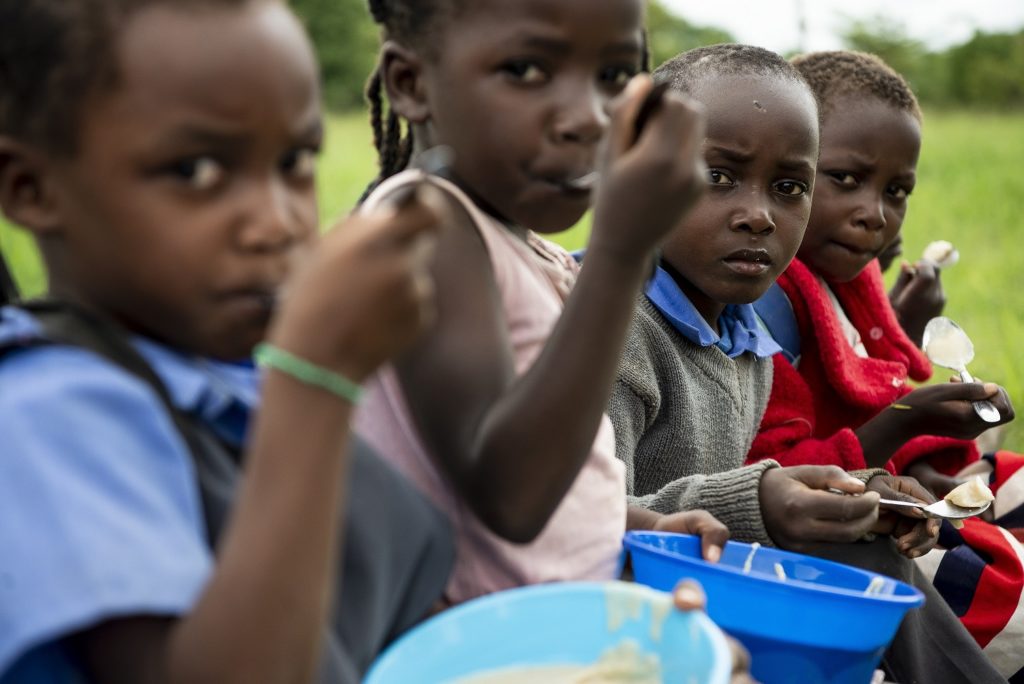 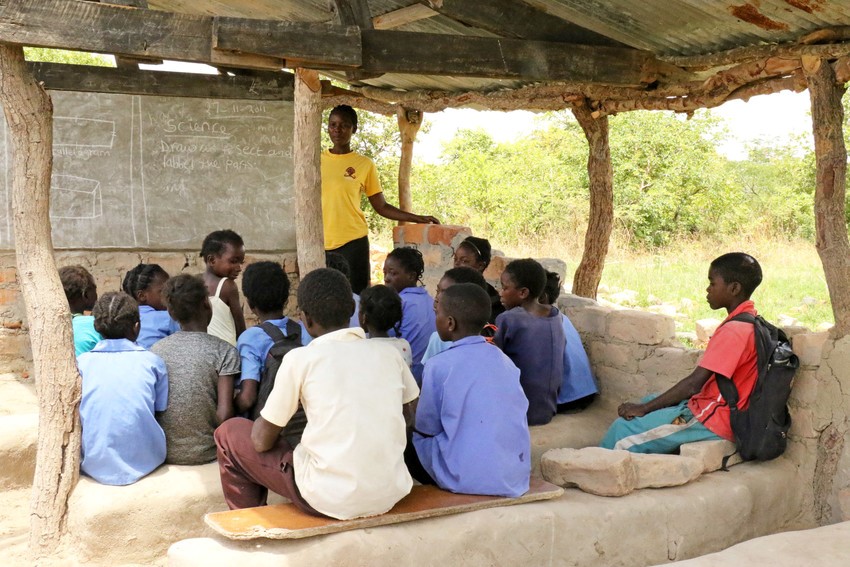 Plan International believes knowledge can change lives. If children receive education, they will learn how to protect their rights and escape from poverty. 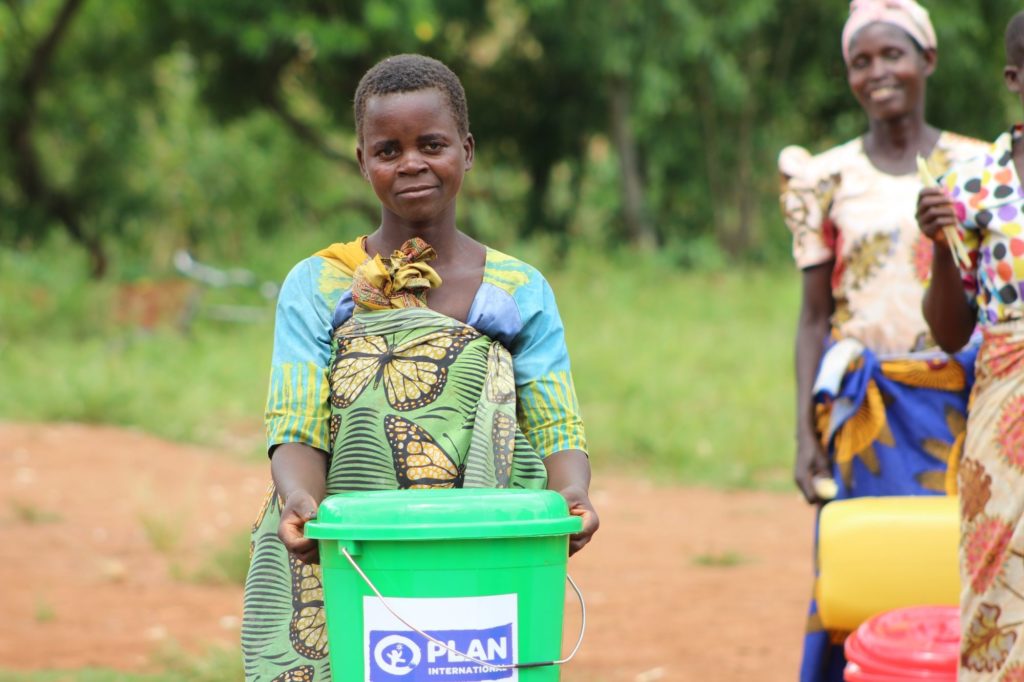 Plan International has provided food, education, shelter and sanitation kits to several African countries like Zambia, Malawi and Kenya. It helps families under food shortages and refugee crisis that are intensified by climate change meet their urgent needs. 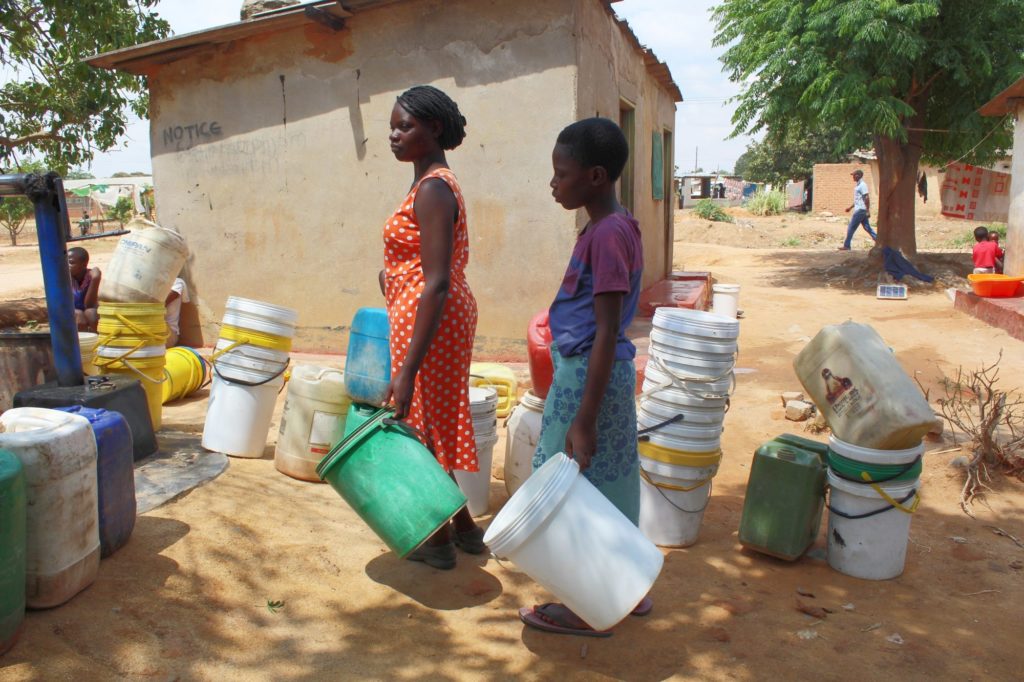 Women lining up with piles of buckets for clean, drinking water distributed by Plan International. They will obtain enough water for the whole family.