A food crisis is threatening many countries around the globe, especially in East Africa. In response, Hong Kong Red Cross, Oxfam Hong Kong, Plan International Hong Kong, Save the Children Hong Kong and The Amity Foundation issued a joint statement to arouse public concern in Hong Kong. Together, the aid agencies also launched the social media campaign ‘A Meal for Meals’ for the duration of June in order to raise funds for those affected by the food crisis.

John Tsang, Alex Fong, Onyee Ng and Chong Chan Yau attended the campaign’s kick-off ceremony today. Together, the four guests experienced a taste of famine through the simple meals they had consisting of food items like potato peels, corn and beans. They then challenged the public to do the same and donate what they would spend on a meal to support the campaign. 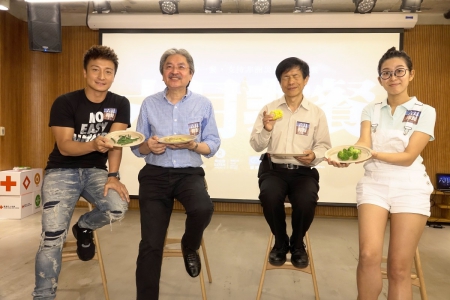 Members of the public are then encouraged to upload a photo or short video to social media platforms, tag three friends to invite them to take up the challenge, and add the hashtags #AMealforMeals, #EastAfrica and #FoodCrisis. 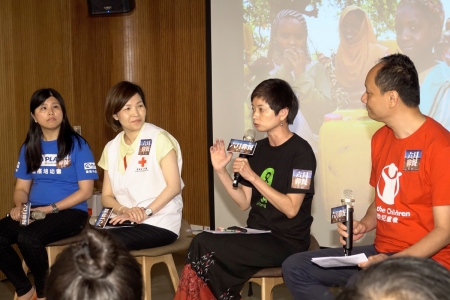 ‘Despite living in Hong Kong, we can still do something,’ they said. ‘The awareness and each dollar raised through the “A Meal for Meals” campaign is a great way to show those in East Africa your support.’

Speaking about the campaign, Bonnie So, Secretary General of the Hong Kong Red Cross, said: ‘In view of the severity of this disaster, we decided to jointly put together this campaign to arouse public concern about the food crisis in East Africa and raise funds to support relief efforts. With this support, we can continue to provide life-saving aid like emergency food, medical services, clean water, and treating malnutrition. With collective efforts from the aid agencies, we would like to raise public awareness on the food crisis issue and call for their support to provide timely assistance to those affected and alleviate the threat.’

Save the Children’s Director of Programs, Aman Yee, added: ‘With 20 million people starving, it’s needless to say that the situation in East Africa is severe. Vulnerable groups such as women and children are most greatly affected, and are in need of urgent assistance. It’s expected that the number of people affected by the food crisis will continue to rise.’

Yee recalled how the international community had failed to respond to early warning signs of a famine in Somalia in 2011, resulting in the death of up to 250,000 people, including 130,000 children. He went on to remind the public that the world cannot afford to make the same mistake again.

Plan International Hong Kong’s Communications Manager, Amy Lau, shared her experience of seeing a girl faint from hunger during her visit to Kenya: ‘In Hong Kong, it’s hard to imagine a child fainting from starvation. When this happened, the local children were in class in 40 degree weather; their ‘classroom’ was made of nothing but branches and metal scraps. Suddenly, I saw a little girl fall to the ground because she was famished. All I could do at that point was to offer the small bag of biscuits I had with me.’

Leung Pui Fung, Oxfam’s Director of Fundraising said, ‘In the United Kingdom and the Netherlands, international relief organisations are working together to organise fundraising activities, and are coordinating their relief efforts on the frontlines. That’s why we launched this joint appeal in Hong Kong today.’

Leung went on to quote World Bank statistics saying that concerted efforts over the past 20 years have reduced extreme poverty rates by half. Just as these efforts made a tremendous impact, every dollar the public donates can bring tangible change in the lives of victims. 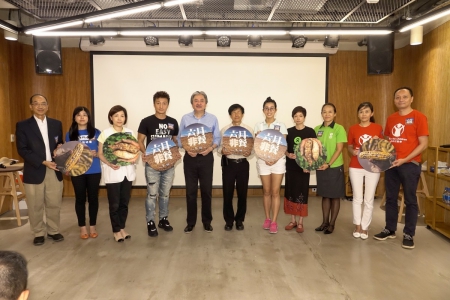 Close to 20 million people are starving in Somalia, Ethiopia, Kenya and South Sudan. In February of this year, the UN declared a famine in Unity State of South Sudan as 100,000 people face starvation and a million are on the brink of famine. International aid agencies are currently carrying out relief work in the affected countries and have stepped up relief efforts. Organisations urgently need public support to continue to their life-saving work.

For more information about the ‘A Meal for Meals’ campaign, please visit our Facebook page.