To celebrate the International Day of the Girl on 11 October, Plan International has organised more than 5,200 Girls Takeover campaigns globally since 2016.  By occupying spaces where girls and young women are rarely seen or heard, they demand actions and solutions to ensure all girls can learn, lead, decide and thrive.

This year, Plan International conducted survey in 31 countries and interviewed 14,000 girls with the theme “Free to be Online?” to study girls’ experience of using internet and social media platforms.  Finding revealed that nearly 60% of interviewees had experienced online harassments, attacks and abuses.  The platforms involving, including Facebook, Instagram, WhatsApp and Snapchat, are very commonly used in Hong Kong.  Thus, the theme of Girls Takeover campaign this year is “Girls Get Equal Freedom Online”.  Through taking over high profile positions, the girls have a chance to speak for themselves and other girls and fight for online freedom for women.

Cosmopolitan Hong Kong of South China Morning Post was being invited to join the campaign this year.  Position of Ms Amy Cheng, Vice President, Content of Cosmopolitan, ELLE and Harper’s Bazaar was being taken over.  As an informative platform for female, Cosmopolitan Hong Kong is transforming from traditional magazine to digital media.  Their social media platforms, including Facebook, Instagram and YouTube, have more than one million followers which give them extensive influence on the Internet and make them one of the best platform to speak for women’s right and online freedom.

Cotrina, Quenby and Janice from Law and Business Management School of University of Hong Kong were the participants of the first time Girls Takeover campaign in Hong Kong.  They were highly interested in girls’ rights and issues and had joined events of Plan International Hong Kong in the past, including Youth Conference and Be a Change-maker.  After being selected for Girls Takeover, they did exhaustive research and studied the “Free to be Online?” report deeply to prepare for taking over Ms Cheng’s work and holding meeting with the editorial team of Cosmopolitan Hong Kong.  On the day of event, they did not make anyone disappointed as they showed the unlimited potential of girls by sharing their thoughts confidently. 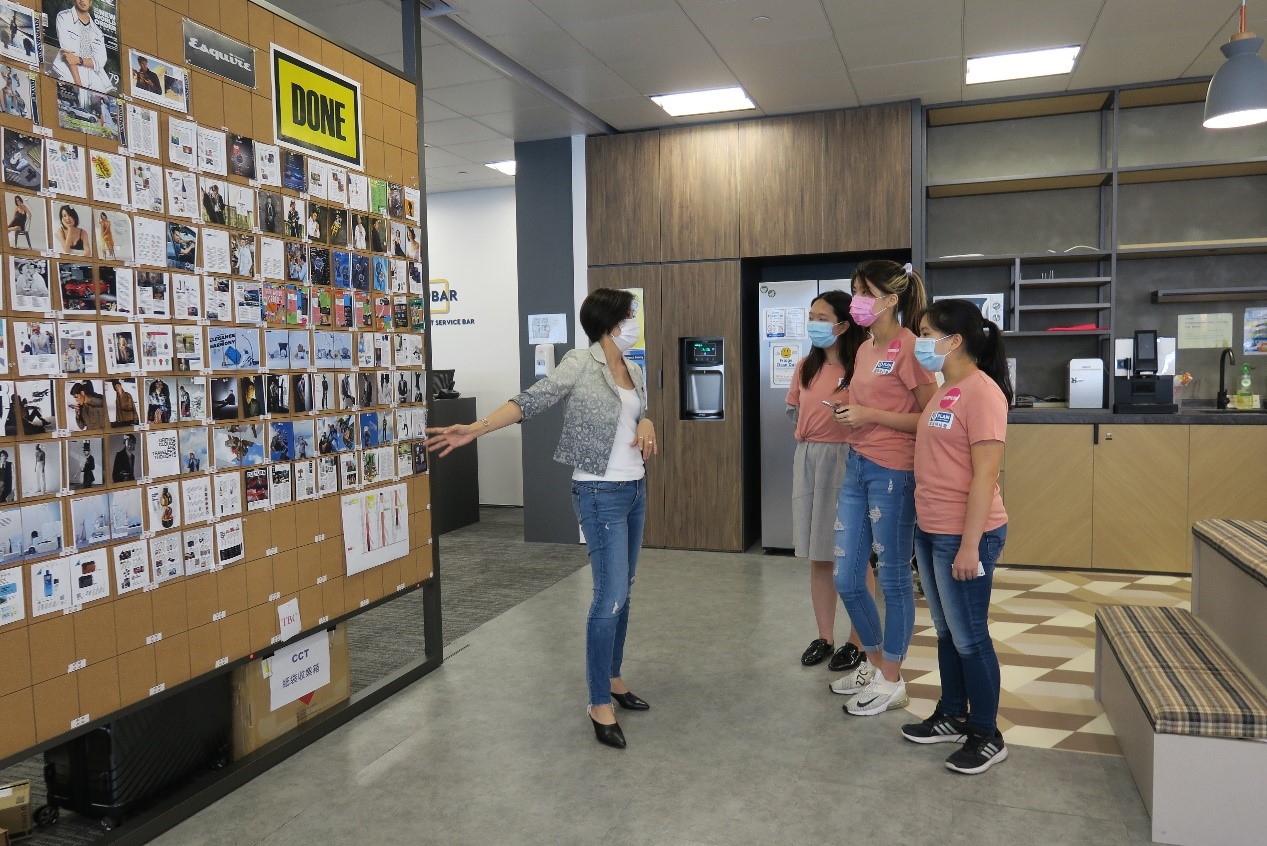 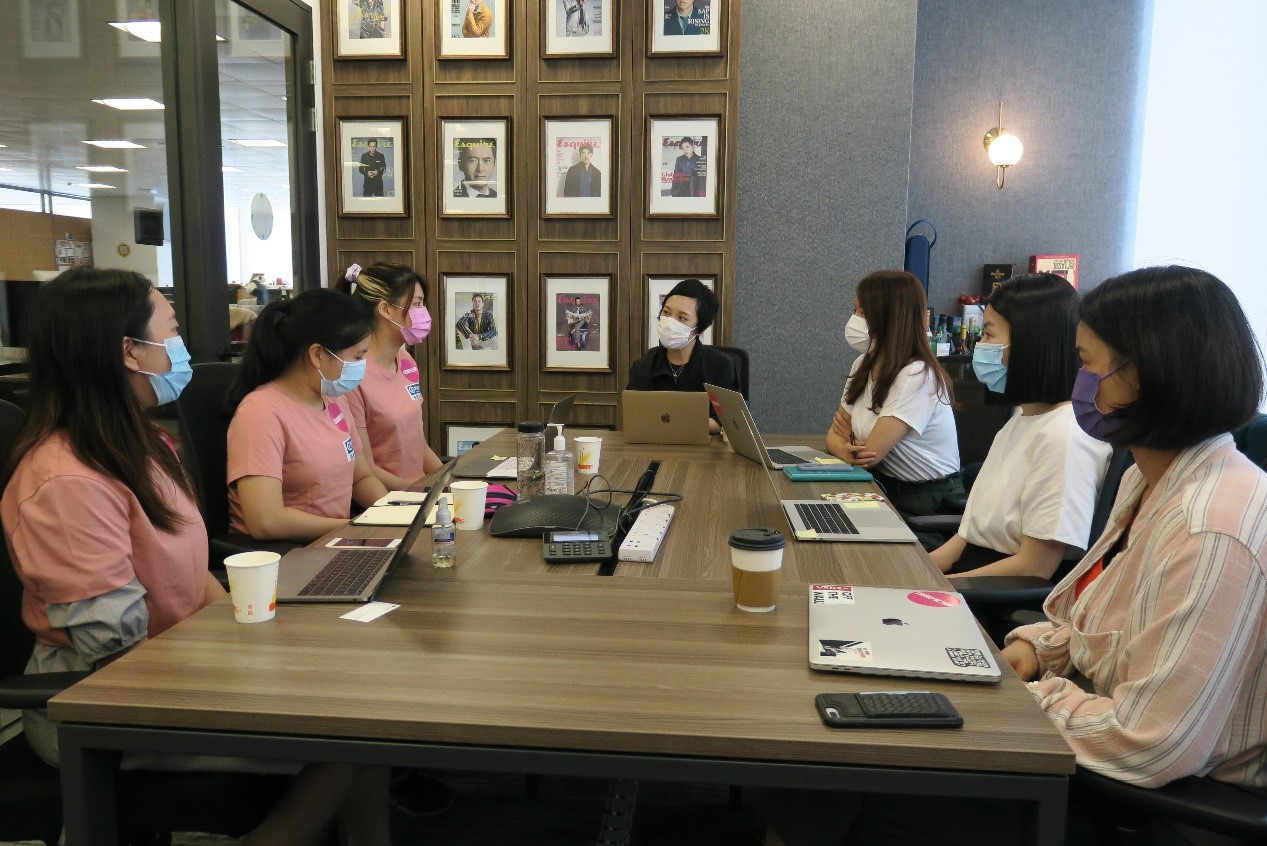 Cotrina, Quenby and Janice discussed the promotion campaign on social media platforms with the editorial team of Cosmopolitan Hong Kong to speak for girls’ online freedom.

The social media promotion campaign jointly prepared by the three girls and Cosmopolitan Hong Kong was launched on Cosmopolitan’s social media platforms in November 2020.  Not only informative infographics were included, but also professional advice from psychiatrist and experience sharing from Ms Joyce Cheng, a popular singer in Hong Kong.  The series of promotion received positive feedback in deepening public’s understanding towards online harassment against women and raising their awareness on girls’ online freedom. 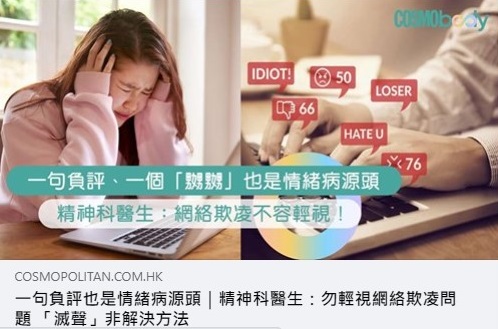 Article on online harassment against women and their mental health.  Please click here to read more (Chinese version only).

Ms Kanie Siu, Chief Executive Officer of Plan Hong Kong, observed the performance of the three girls during their preparation and on the day of event and provided timely help and guidance to them.  “These girls were deeply concerned about topics on girls’ online freedom.  They actively participated in the Takeover event and shared creative and feasible advice in the meeting.  What they achieved embodied the purpose of Girls Takeover, which was letting girls well utilise their ability and power.”  Ms Siu also thanked Cosmopolitan Hong Kong and Ms Cheng, “it was the first time Girls Takeover campaign held in Hong Kong.  Thanks Cosmopolitan for trusting Plan Hong Kong and supporting the campaign, so that our young girls could have the chance to speak for women through a popular platform with huge amount of followers.  In the course of the campaign, they were also able to learn valuable knowledge on leadership and promotion skills, which would be very useful to their future work.”

Ms Amy Cheng was glad to be invited to participate in the Girls Takeover campaign, “these girls were young, energetic and very interested in media work.  I was honoured to share my experience with the young generation to give them a first glimpse of real workplace.  The campaign was very meaningful and I hope the girls could well utilize what they learnt in the future.”  Ms Cheng also mentioned that the theme of Girls Takeover this year, “Girls Get Equal Freedom Online”, perfectly matched with the spirit of Fun and Fearless of Cosmopolitan, which encouraged women to be brave, innovative and to love their life.  She hoped the collaboration could arouse public’s attention to online harassment against women. 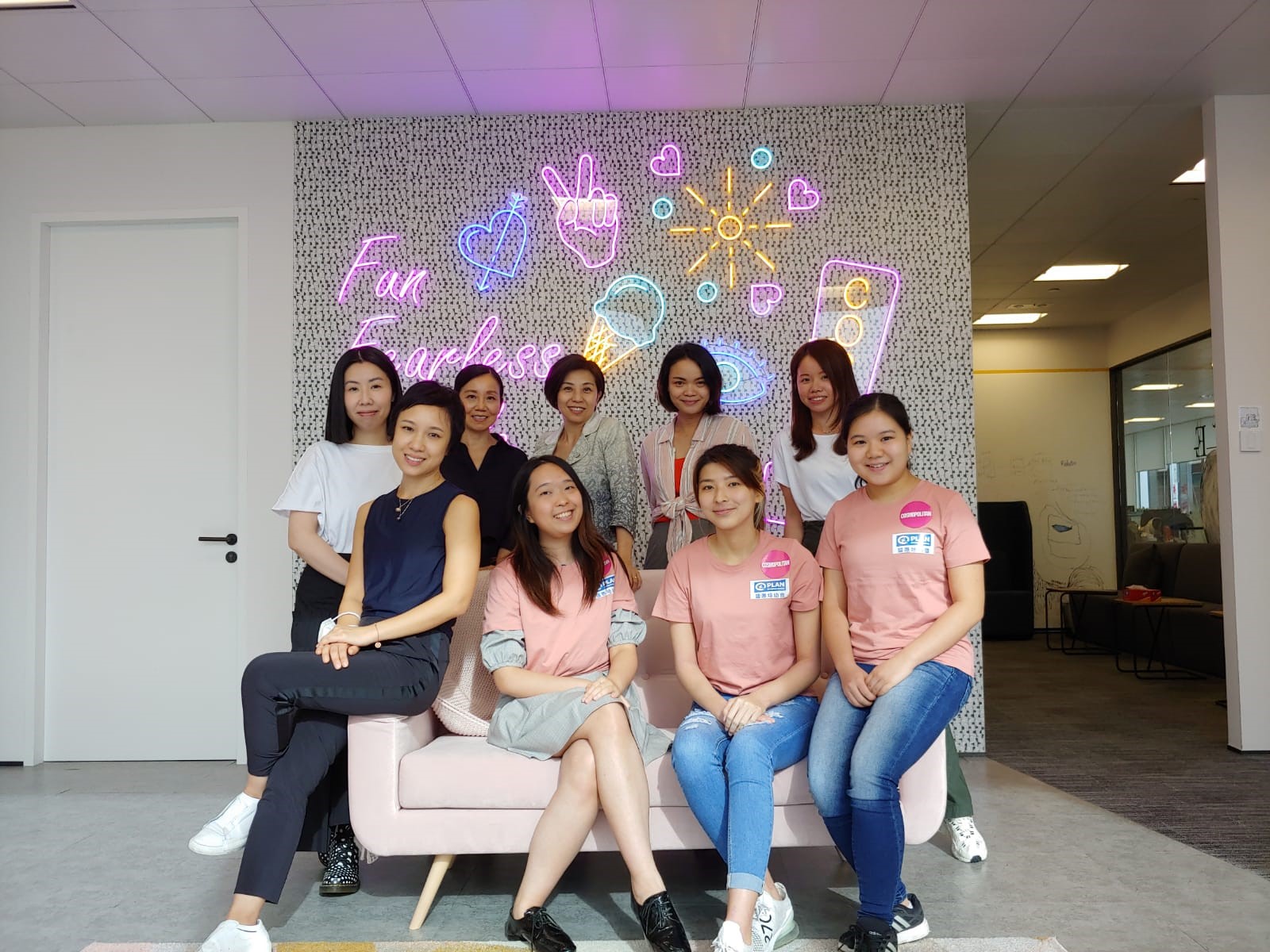 Ms Kanie Siu (2nd from left in back row), Chief Executive Officer of Plan International Hong Kong and Ms Amy Cheng (centre in back row) appreciate the performance of the girls.

The three young girls all agreed that Girls Takeover was a fruitful experience for them.  At first, Quenby felt quite intimidated that she needed to present her ideas in front of the professionals.  She was worried that it would waste their valuable time.  However, after seeing everyone listening very seriously and providing professional opinions which refined and realized their ideas, she felt relieved.  “Not only did this experience allow us to spread the awareness of the problems girls face online, it also helped me grow as a person as I saw how responsible and dedicated the female leaders I met were.”  Cotrina mentioned that they were blessed to be supported by Ms Cheng and her colleagues, which made their project gain more attention than other student-initiated campaigns.  She also thanked Plan Hong Kong, “the Plan team could not be more supportive in leaving us room for decision making in the course of the campaign.”  Janice expressed that the younger generation, especially girls, were more vulnerable to online harassment in this technological era.  “Actions, like education and set up relevant laws, should be in place to stop girls from being intimidated by cyberbullying and online harassment.”