The second “Because I am a Girl (BIAAG) – Donate a Pencil Campaign” will be held from 7th to 16th October 2014, calling for donations of brand new pencils from the public, which will then be sent to underprivileged girls as a tangible support to their studies, while raising public awareness of girls’ rights. A huge pink collection box modelled after a pencil holder, featuring the popular Hong Kong cartoon figures Mcmug & Mcdull, has been set up on the Atrium, 1/F, Hysan Place, Causeway Bay. In response to the United Nations’ annual “International Day of the Girl Child”, Plan International Hong Kong commenced the event on 7th October in a Launch Ceremony supported by BIAAG Ambassador Mrs Christine Ma-Lau, Founder and Principal of JEMS Learning House, and Special Guest Ms Gloria Yip, Founder and Director of Hong Kong Clay Craft Academy. 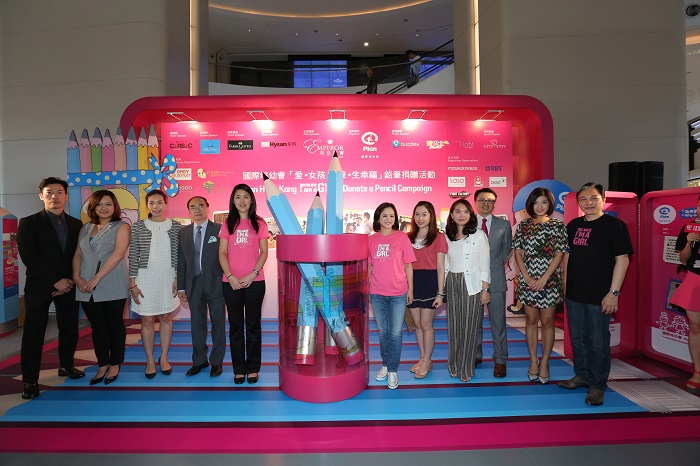 The ceremony began with a welcoming speech by Officiating Guest Dr Royce Yuen JP, Board Deputy Chairman of Plan International Hong Kong, who then presented certificates of gratitude together with Dr Darwin Chen, SBS, Board Member of Plan International Hong Kong to the supportive sponsors, including: Main Sponsor Emperor Watch & Jewellery, which marks its fifth year of consecutive sponsorship to BIAAG campaign; Venue Sponsor Hysan Development, which has provided the event venue for two consecutive years; Silver Sponsor CARSAC Limited; Bronze Sponsor Holly Brown Coffee; Media Sponsor Buspak; Pencil Sponsor Faber-Castell; and Fight Factory. The ceremony proceeded with a sharing section by BIAAG Ambassador Mrs Christine Ma-Lau and Special Guest Ms Gloria Yip, who encouraged the public to support the event. Finally the event was officially launched as Dr Yuen, Dr Chen, Mrs Ma-Lau and Ms Yip inserted the huge-sized pencils into the collection box, a simple yet symbolic gesture that commenced the event. The ceremony was followed by a guided tour for the press on the pink fundraising bus, which is equipped with multimedia in-bus donation function. Raising funds for Plan’s “Girls Fund”, the bus will operate mainly along Hong Kong Island for four weeks until 3rd November.

Donated pencils will be collected by Plan from 7th to 16th October, and then sent to underprivileged girls in China, Ghana, Nepal and Northern Thailand by this coming Christmas, as gifts imbued with a wish for a better future. 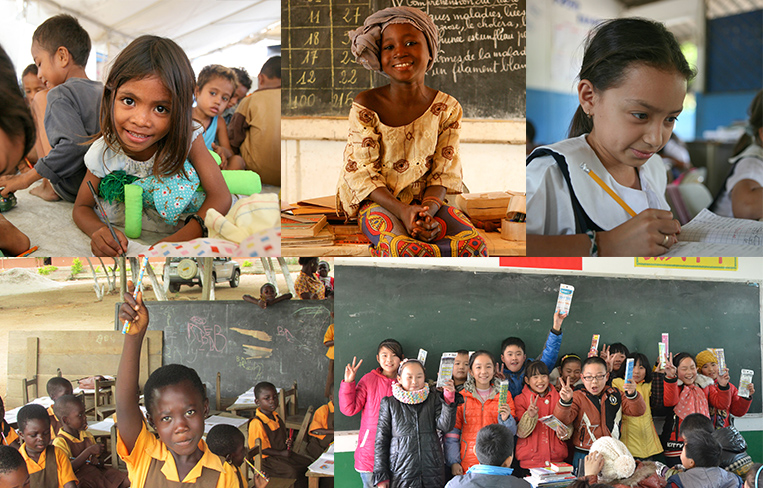 Ms Gloria Yip was one of the pencil donors in last year’s event, and took an even more active part this year. “There are countless girls around the world facing discrimination because of their gender. To improve their living quality in long terms, we should start by offering them education. The ‘Donate a Pencil Campaign’ is a good way to show our individual support. I’ve heard that this year Plan has introduced a charity sale on site. Through direct donations or purchasing pencils, we can further support the girls and maximise the effect of this meaningful campaign.” 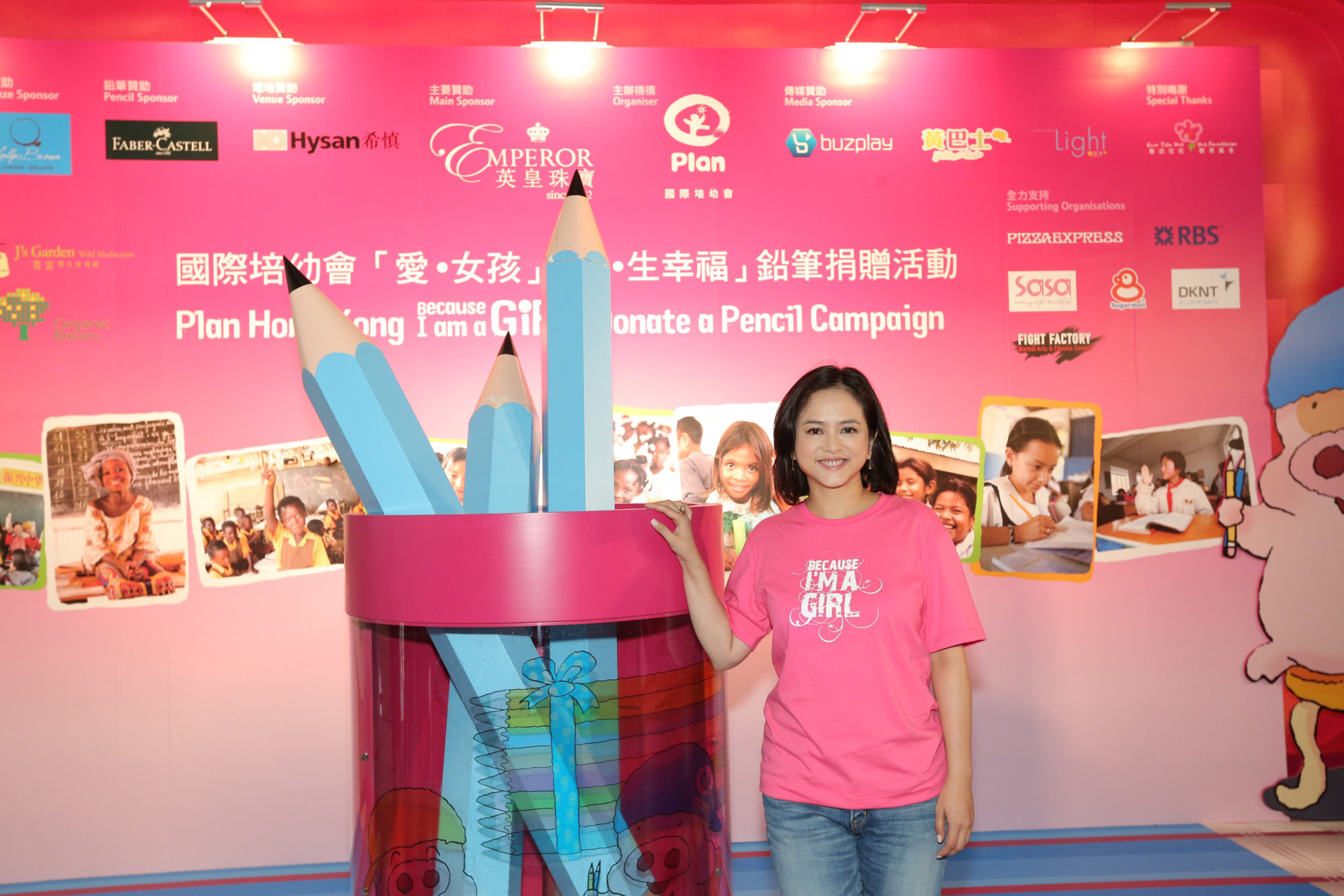 Having been a BIAAG Ambassador for almost five years, Mrs Christine Ma-Lau has demonstrated her commitment to the charitable cause of BIAAG through her active involvement annually. “As an educator, I absolutely understand what a significant change can be brought to children by education; on the other hand, encouraging kids to take part in charity work is not only a way to offer our individual assistance to the needy, but also a good chance to cultivate empathy and wholesome personality in children. Let’s continue our support to the event this year, and create another success together.” Dr Royce Yuen JP, Board Deputy Chairman of Plan International Hong Kong, expressed his gratitude to the public by recalling the previous success, “Last year we collected an impressive amount of 100,000 pencils within merely 11 days, thanks to the ardent support from the Hong Kong public. Plan has always been devoted to helping the needy children around the world, among which girls are particularly disadvantaged. It is often heard that girls in developing countries are coerced into early child marriage, and these heartbreaking incidents remind us of the girls in need of our help. On behalf of Plan, I would like to invite the public to join us in this year’s event, and spread the good cause to friends around you as well. With a pencil imbued with our good wishes, let us help the girls alter their destiny with the power of knowledge.” 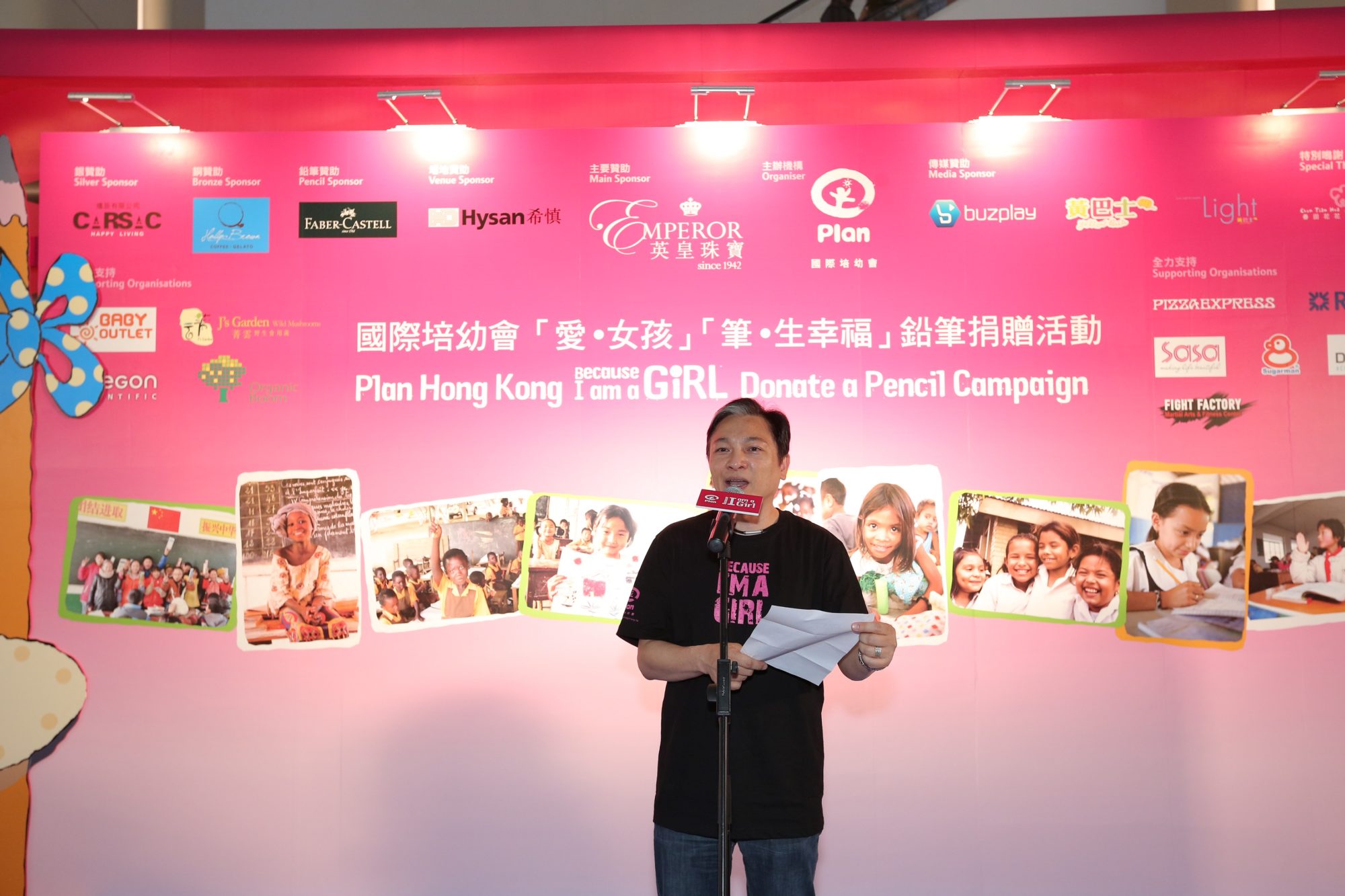